It’s been over a month since I last did one of these. Because of how life is, I’ve decided to change the Classic Comic Friday’s to the beginning Friday of every month – only because I cannot guarantee a regular Friday update it seems.

As for the unfamiliar, Classic Comic Fridays are comics pulled from my own personal collection which I then decide to review – for whatever reason.

Branching off from the Hulk comics, the story starts off with Bruce Banner trying to find a place to hide. Thankfully, his cousin Jennifer Walters, is a criminal lawyer who works nearby in Los Angeles.

Jen decides to take Bruce to her house for safe-keeping, and the two catch up with each other in the car. There, Jen reveals she is working on a high-profile case which Bruce thinks may put her in danger. After Jen suggests to Bruce that those types of things only happen in movies, they arrive to Jen’s home to be fired upon some thugs. Jen is hit, and Bruce tackles them away – avoiding turning into the Hulk. He realizes Jen is gravely injured, so he rushes her to a closed practitioners office and does a quick blood transfusion to help her until an ambulance arrives.

At the hospital, Bruce is held for questioning because he has no ID and is considered a suspect. He Hulks-out and escapes the hospital while Jen recovers. While recovering, the thugs who tried to kill her before reappear dressed in doctors costumes. As they try to chloroform her, she gets angry and transforms into – what the thugs call her – a She-Hulk!

They escape the hospital and She-Hulk chases them to their car where she off-roads it and gets information on who hired the hit on her. She then escapes back to the hospital – winding down in energy to turn back into Jennifer Walters. The goes into another hospital bed and tells a nurse she left her old room because she was scared of the noises she heard. Relaxing, she realizes the blood transfusion would have caused the change and proclaims, “Whatever Jennifer Walters can’t handle – the She-Hulk will do!” 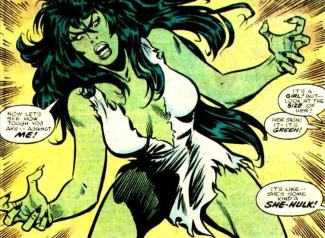 Stan Lee dedicates the first six-or-so pages to the history of Jen and Bruce – revealing they are cousins and also giving a brief reasoning through their dialogue on why Bruce would trust Jen. We also get a lot of information about Jen within those pages, setting up the character to exactly how she is even now in comics. These few pages were essential to the book and really shaped how She-Hulk would appear in later comics.

However, from there-on, the book really picked up in pace, and I felt a bit over-whelmed in how quickly everything was going. Bruce turned refused to turn into Hulk when Jen was shot, but once arrested it was no problem? How does a blood transfusion save bullet wounds with the bullet still inside? Although the answer may be “it’s just a comic book,” I feel as if they were still somewhat cop-outs to how the book could have went. Given Lee only did this one book, I can understand why he wanted everything to be wrapped up so quickly.

Overall, it was an impressive start to begin a career for Jennifer Walters. It may not have been Stan’s best start to a new character, but She-Hulk definitely found a place for herself within the Marvel Universe.